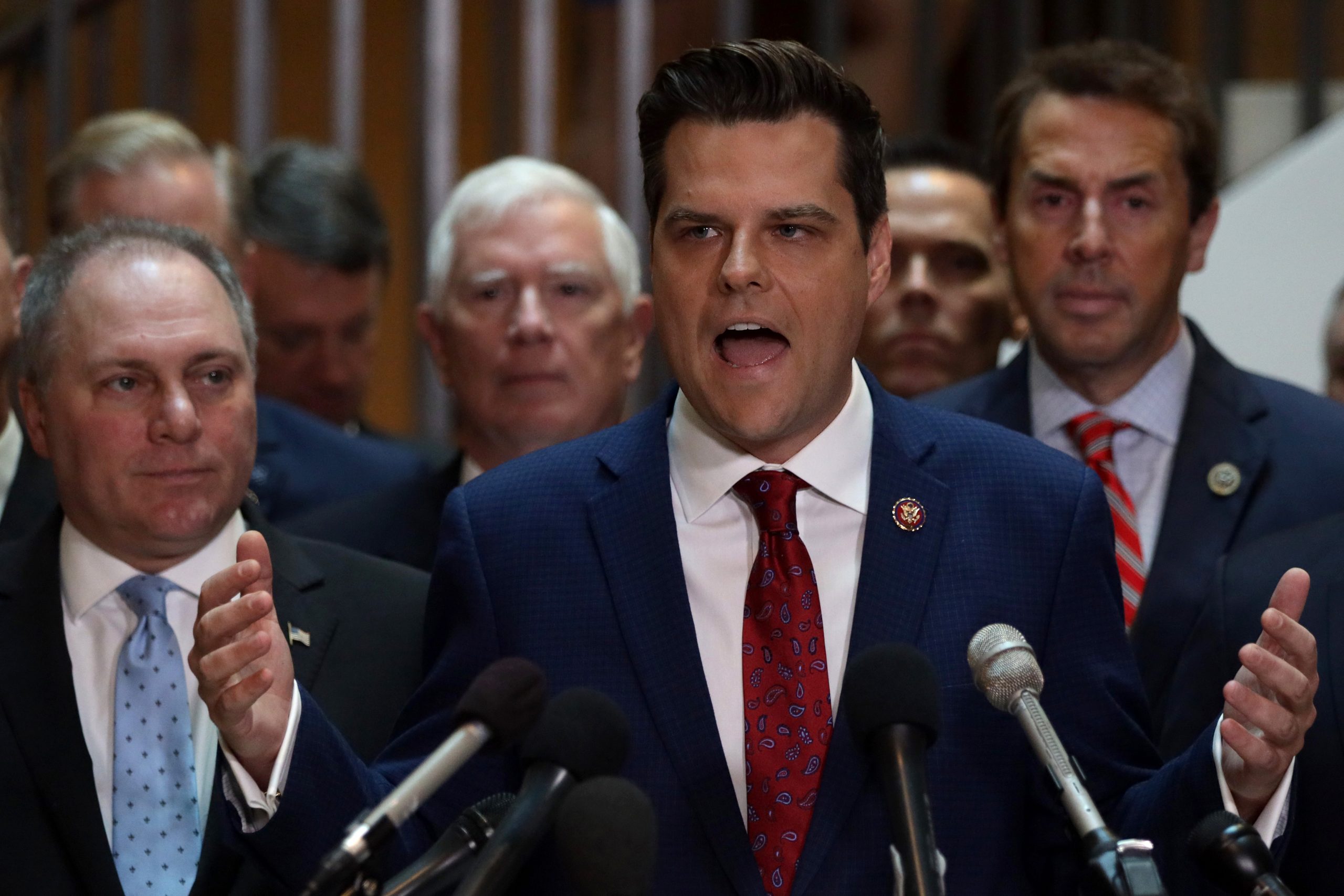 Monday, Rep. Matt Gaetz (R-FL) was a guest on the Impeachment Podcast with Jason Miller, Raheem Kassam, and Stephen K. Bannon talking about what to expect out of a House Judicial Committee hearing on the Impeachment of President Donald J. Trump,  later this week.

“The more the Democrats put out the evidence for impeachment, the more Americans dropped off and turned out.  But going for the impeachment is like shooting the Moon, the Democrats have to keep going.  Their base will be furious if they don’t go for it,” Gaetz said, reflecting back on the previous week’s impeachment hearings.

“Wednesday they will bring on a group of pious , condescending law professors to talk down to congress and the MAGA movement will say something like, we need to impeach because we the smart folks have decided this [Ukraine phone call]  is not acceptable behavior,” he said.

“Americans will ask what this has to do with me?  this is their principle governing principle to impeach and not pass USMC, or deal with issues that affect people,” Gaetz said.

“There will be a Judiciary hearing on Wednesday in the House Judiciary Committee and we don’t know who the witness are, as of today.   The  White House won’t participate in the sham- they won’t be there,” Gaetz reported.

Co-hosts asked Gaetz to discuss his ideas about Trump deciding not to appear at the hearings this week.

“I would bring every tool to the fight.  The concern for them is that the rules keep changing, the ground keeps shifting.  We are not in a legal fight.  We are in a brass knuckles political right.  We have a disadvantage because the majority has misused their power,” he said.

Talking about the recent Town Hall meetings with his voters, Gaetz said he was not getting much concern from his constituents on Impeachment. “Potamic fever is what we don’t want.  There is anxiety out there with the people, but not so much about impeachment- but we are not dealing with the issues that people care about,” Gaetz said.

“Talk about the Minority report that will come out,” Bannon, Chairman of Citizens of the American Republic said.

“It will be the factual predicate but Schiff’s report will ‘put a thumb on the scale” to taint the facts,” Gaetz replied.

“He [President Trump] is the Commander in Chief.  He was duly elected because of his  American First policies and that is what the people want.  We see it working on the world stage.  That was the debate about Ukraine is about,” Bannon said.

“Go back to the Constitution, he is the president and this [Impeachment] is an interactive policy dispute.   I am sorry Fiona Hill doesn’t like him.  It is outrageous that the office is not respected. This week will be show time,” Bannon said.