VIDEO: "We Were Saved By The Grace Of America", Former Refugee Issues Challenge To Omar - Citizen Media News 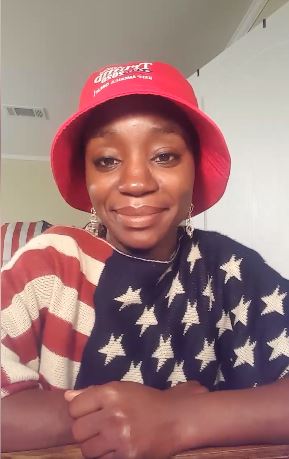 Agnes Hass is an American citizen, a Conservative Republican, a former refugee from Africa who has her sights on debating Rep. Ilhan Omar (D-MO) over charges that American is not good.

Sunday, Hass published a video on Facebook and was a guest on Rebel Legends Patriots Soapbox, a grassroots platform to talk about her challenge to the Congresswoman.

“I saw America rescue people from Liberia right before my own eyes when I was a child.  I later became a US citizen.  I always thought America was great because she loved all of her citizens. I don’t think the government loves us anymore,” Hass told Patriots Soapbox.

Hass says she is greatly hurt by what Omar says about America.  “She is always running America down, and America gives her things she did nothing to deserve, like free school.  How can she be so hateful?  I am a refugee from Africa too, and I love America,” Hass said.

In her video on Facebook, Hass said toward Omar, “You came to America from Africa, and America rescued you, we both come from war-torn countries. My family came from Liberia.  We have both been saved by the mercy and grace of America.  Here is my challenge to you, Ilhan Omar, to a debate you on TV for free. This is not a white person coming after you. This is not a person of privilege coming after you.   I am not educated.  I happen to appreciate and love America.  You don’t seem to understand what America did for you.

I challenge you to a debate.  This will be a national debate, on TV between two Africans about how America saved us.

I want an opportunity to tell people why I love America.  Two African sisters coming together to talk about different viewpoints about how America who gives us hope,” she said.

“I will do it for gree. You can have Qatar pay you, that is not my deal,” Hass said.