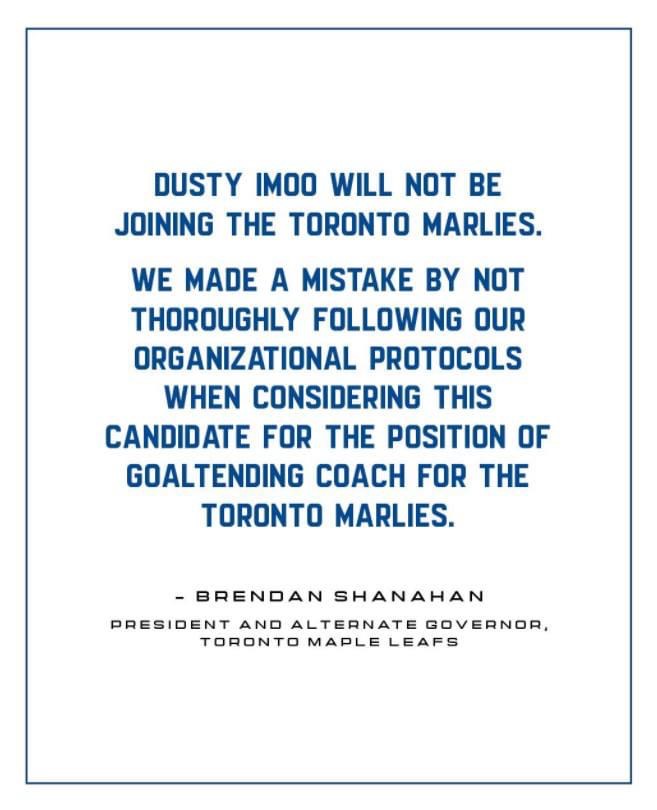 After his being hired, the SJWs at Leafsnation Twitter were very quick to discover and point out – not what Imoo has tweeted over the course of time (actually, basically nothing) – but rather who he follows and what tweets he’s liked.

His follows include, but are not limited to, Nicole Arbour, Tomi Lahren, Kayley McEnany, and Dean Cain as well as a number of Republican politicians, and he’s liked tweets commenting on BackTheBlue and whether biological males should compete in women’s sports against biological females and Lebron James’ social media shots at the police and McEnany’s JAN 6 tweets, etc.

His account has now been closed, maybe even by he himself. In any case, you can’t even look at what he liked and who he followed in order to make your own opinion.

However, some of the SJWs there who now love referring to him now as a racist, transphobic, insurrectionist, anti-vaxxing POS did manage to make screenshots of some of the tweets he liked so as to make a point.

As such, you can now see a good 10-15 of them documented across several tweets. And as you can imagine, the statements in these tweets are basically the thoughts of just about anybody who is a conservative thinker, which for some tweeting TML fans means the guy is a white supremist.

But as Shanahan’s statement above goes to show, bow to social media mob rule one must.

Ironically, this was a pure Dubas hiring. Campbell is his boy and Campbell swears by Imoo, an Asian-Canadian BTW, with whom he worked in LA.

Naturally, there was probably no background check or anything of the nature. This was a connections move.

Now, Shanahan’s not only bowing to the social media mob witch hunt, but covering his boy Dubas in the process.

This could be a good thing for your favorite hockey team though… this guy Imoo seems to know what he’s doing as a goalie coach.