Reports coming out of Tulsa, Oklahoma have folks on the ground telling a different story of what the mainstream media is portraying.

At the heart of Citizen Media is when a citizen reports first hand what happens at an event based on truth not filtered through censorship, an agenda, or corporate greed.

Three individuals tell their story of what happened as they attended President Trump’s rally last night.

The first story comes from a lady who made it outside the venue.

Thousands more peaceful and positive supporters with tickets are not being allowed past barricades. We were told there are ‘no more screeners’ to let us through the checkpoints. We’re told to go home. If you hear there’s a poor turnout, it’s simply not true.

The next comes from a couple in attendance at the rally.

Very disappointed in our City. I got downtown to the Campaign Rally three hours early. The barricades were all around the arena and they closed it down. Wouldn’t allow us inside and I had tickets. The LIBS did their best to keep us out and scare everyone away. There were thousands upon thousands of people outside not allowed in. What a joke. It was by far a sell-out!! There are at least 15,000 people outside trying to get in.

Finally, this story has details behind it about the goings-on from last night.

Here is how a corrupt convention center management team kills attendance at a Trump Rally. I was there and saw most of it first hand, followed by other individuals tonight that never got past the temperature screeners.

Bank of Oklahoma Center (BOK) holds at least 19,000 people. The area outside the convention center set up by the Secret Service and Tulsa Police Department had a ‘U-shaped’ squeeze through to 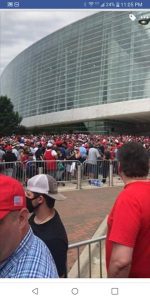 funnel the crowd down to an area about fifty feet wide and six hundred feet long with an outdoor stage. This was adjacent to the BOK entrance. Trump was supposed to be able to speak to the overflow group from this stage.

Entry to the “Secure Area”, NOT the BOK center, was about five blocks away from where you had to pass the “screeners” who took your temperature, made you put on a face mask, and gave you a green band to proceed to Secret Service Security checkpoint.

If the temperature screeners left their post, the entire entry to the BOK Trump rally would shut down. This is EXACTLY what happened about an hour after we got through the security checkpoint.

Because of social distancing, the BOK staff, just before the doors opened, had blocked off every other seat in the arena. This meant the arena would only hold about 9,500 people.

After a continued back and forth discussion with the Trump campaign, something happened to allow more people into the arena. Only groups of just one hundred at a time we let into be seated.

We had to wait about thirty minutes each time they let just another hundred of us trickle into the building. I am not talking about their security, we had already passed through metal detectors and everything. You could actually run into the building each time they would let just a hundred of us in at a time. This was just wrong and corrupt on BOK management’s part. They eventually removed the sticker rule on every other seat, but only after they shut down all entry to the “event location”.

It was like the people that collect tickets said, “I am done we are leaving.”

They did indeed leave their checkpoint posts.

After this, thousands of individuals could not get into the first checkpoint because the temperature screeners had to put a green wrist band on you in order for you to gain access to the Secret Service security checkpoint.

No green band— no entry to the security checkpoint.

BOK management told the screeners that the arena had reached the capacity for this rally. So they shut down and did not allow the other Trump supporters to get their temperatures checked. Thus, no more green wrist bands to pass through the secret service checkpoint. Again, if they did not issue you a green wrist band so you could not get into the holding area to see the stage for the outdoor Trump Rally.

It was a setup to make it look like the crowds did not show up. The crowds DID indeed show up. At 5:00 pm, about two hours before the event, no one was there to let them get to security.

With only about 3/4 of the building full and no overflow crowd, CNN boasts that the rally was a flop. The only thing that was actually a flop was BOK temperature screeners turned away thousands of attendees that never got to enter the area be near the rally.

This is pure political corruption at it’s finest.

The super high energy crowd was there.

They need to fire the BOK manager that oversaw this disaster.

President Trump, we as the crowed tried, but with corrupt BOK management, your crowd was downsized.

We need a re-do without a crooked BOK building manager. On top of all that, even Uber was not accepting payments for any rides to the downtown area for the event.

I hope this backfires on all these crooks.