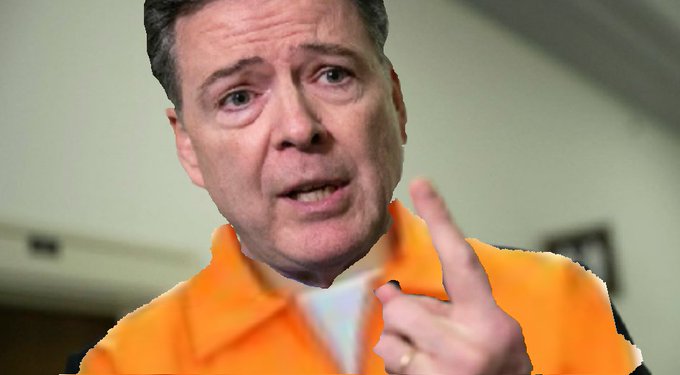 James Comey, former FBI director who allowed former Secretary of State Hillary Clinton to get away with hiding explosive emails away from public view, wrote an op-ed for a heavyweight Democrat media comrade, the Washington Post, crying about President Donald J. Trump and his supporters.

Comey, in his typical style, Gaslighted the public and claimed to be the victim of Trump’s and of the American people who support Trump.

In the Op-Ed Comey defends his friends in the Administrative State, who together have been responsible for perpetuating numerous hoaxes meant to overthrow the American Republic, replace the President, and disenfranchise tens of millions of Americans.

Without any concern about the numbers of military men and women who have defended our Republic for hundreds of years, or the Americans who have lost so much because of greedy politicians and their self-serving policies, Comey discusses how he is the leading victim of any who dared support Trump’s America First policies.

“It feels like a strange and slightly sad old guy yelling at you to get off his lawn, echoed by younger but no less sad people in red hats shouting, ‘Yeah, get off his lawn!’” https://t.co/64MrPEN9S9

Comey shows a total lack of concern for American Justice, and for protecting American Civil Liberties for the people who are not politically connected, like the friends he says have been hurt by Trump, are well connected, wealhty and powerful.

Making a play on the stages of grief, Comey in his op-ed, makes a desperate plea to remain the perpetual victim, perhaps concerned that people may begin to notice his comrades have really gotten out of control in DC the last few months, exposing gluttonous power grabs and abusing  Miss American Liberty and Justice.

Or perhaps Comey is worried about sharing the spotlight of victimhood?

Schiff Shouted Down At Town Hall..

IF YOU COULD SAY 1 THING TO ADAM SCHIFF.. WHAT WOULD IT BE?https://t.co/aWzcXHflne

Who is also going for the poor little victim thing:

We did not come to Congress to impeach this President.

But history called upon us to uphold our oath. And we have.

Together, we will emerge from this dark chapter.

And make our democracy stronger still.

Those poor people in the Administrative State DC, it is almost as if the American people just don’t understand their peril.