"Hey! It's All Anecdotal"

The term “anecdotal evidence” is a phrase that should never be heard again.

Picture anyone of the TV CSI type shows. The investigation team has pictures of all the suspects in the case pinned up on a bulletin board. The heroes try to make head or tails out of what is in front of them in order to solve the crime.

In reference to this election cycle, the overwhelming numbers of people casting ballots to Biden getting more votes than President Obama, are samples of the pinnings you would find on the tv show detective’s board.

However, the patterns just don’t make sense unless they were manipulated.

Patterns in math always make sense except in the political left world.

Here is another pattern formed out of reviewing statistics.

All three of these states do not have another statewide “main-event”.

Three states with a similar pattern. A total of about 137,000 votes for Biden’s margin of victory in those 3 states.

If you are going to cheat in the Presidential race by altering the vote count through various means, you would also have to alter numbers for the other statewide races of equal importance such as a senate race or governor race. By choosing these three states you limit the exposure of the fraud by limiting the elections violated.

Here is a race that was going to be off the charts with all those people running for the two seats. About 150,000 total margins of victory for Biden in Georgia. Any fraud in this race would have gotten last in the shuffle even at the presidential level.

If the number of electoral votes for Biden is 306 votes, subtracting the 36 from those three states, leaves him with victory at 270 total electoral votes. 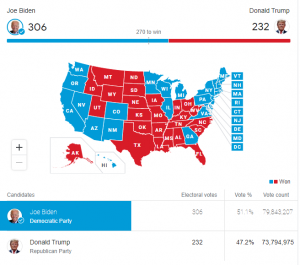