Raleigh, NC – On Wednesday, August 4, 2021, a group of concerned Nurses and Healthcare workers gathered in the State’s Capitol. Among them was Congressional Candidate Sandy Smith, a voice and leader for Eastern North Carolina Politics.  The Healthcare Heroes Vaccine Freedom March stood with Nurses across the state to protest and speak against mandatory vaccination as a condition for employment. 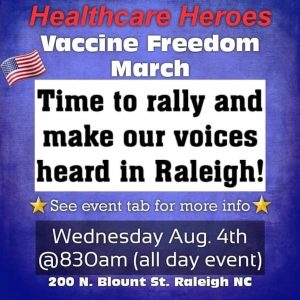 Candidate Sandy Smith stated, “A year ago, our nurses and medical professionals were hailed heroes as they stepped up to the call of duty, and now we are threatening termination if they choose not to take an experimental shot. This is crazy.”

She continued to say,

“We must stand up and protect medical freedom in our country. We already have a nursing shortage throughout our state. This mandate is only going to make things worse. And the people who are going to suffer truly are the sick.”

Smith, along with the group of Healthcare workers and Nurses, walked door to door to each State Representatives and State Senators’ office voicing their concerns about the vaccine mandate.  They passed out material supporting their position, demanding the General Assembly take up the issue and let freedom of medical choice reign in North Carolina.

It appears the legislators were listening to their concerns as the following day, State Representative Keith Kidwell, along with 54 other members of the General Assembly, announced they are now calling on all major hospital systems to re-evaluate their decisions to require all staff to have the COVID-19 Vaccine as a condition for employment.

This appears to be a small victory in a long battle for medical professionals in North Carolina. No matter how big or small the fight in North Carolina, Congressional Candidate Sandy Smith continues to make inroads to protect individual rights and freedom of medical choice for North Carolinians. 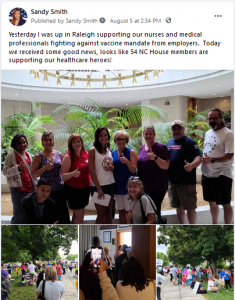