The midterm elections may be sixteen months away but questions still linger in many states as to the validity of the results of the 2020 election. Efforts are ongoing in states such as Pennsylvania, Georgia, New York and Arizona to get to the bottom of what many perceive as voter fraud and voter machine irregularities.

Another state whose results have come into question is North Carolina. One politician who is leading the charge in North Carolina calling for a full audit of voting machines in the state is Sandy Smith, a Republican candidate for the 1stCongressional district in the Tar Heel state. Smith lost her congressional bid to Nancy Pelosi’s number three man in Congress, incumbent Democrat G.K. Butterfield, in 2020. 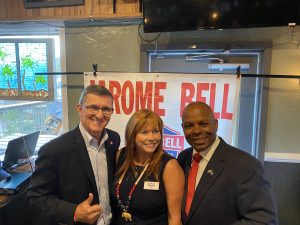 Smith, in a recent email to her supporters, addressed what she perceives as irregularities in the results of her own campaign against Butterfield. She contends “voting machines stink and can be manipulated” and “there’s already doubt. When you have the vote count in my 2020 race stopped for nine days and then my opponent suddenly spurts ahead, something is fishy”.  In spite of other congressional races reporting in the late hours on Election night as having been in the 98 – 99 % range completed, the count in the 1st District race had been frozen at 78%. Smith said she inquired as to why the vote count was frozen for that period of time and the only answer she received was“they don’t know why but it shouldn’t have happened.”

Smith stated she believes one of the reasons for resistance to full audit of election results is what she calls “the magnitude of fraud that could potentially be uncovered.” Interestingly enough, she states that an audit would not justbe a one party thing but that there are issues on both sides that need to be resolved and would benefit any and all who would call for the audit. She expressed concern about the ES&S (Election Systems & Software) machines manual on the NCSBE (North Carolina State Board of Elections) website in North Carolina. Those machines were used in the majority of counties across the state and currently have47 pages redacted from public view. She believes the public deserves to know why that is so.

The effort has been stonewalled by the NCBOE.

Chairman of the caucus, Rep. Keith Kidwell (R-Beaufort), told The Epoch Times that although there is a statute that requires state employees to comply with requests for data from the North Carolina General Assembly, Karen Brinson Bell, executive director of the elections board, declined the request to inspect voting equipment used in the November 2020 election in a July 7 letter.

During a July 15 press conference, Kidwell said the HFC had been responding to public concern regarding transparency in the election process.

Before the denial, the HFC met with the BOE twice, and Kidwell added that Elections Systems & Software (ES&S), the largest election vendor for North Carolina, agreed to provide access to three voting systems it manufactures.

At the time, ES&S indicated that they would be willing to take any inspected system at a randomly selected precinct by the HFC and recertify the equipment so that there would be no cost to the BOE or county, Kidwell said.

ES&S, he said, “seemed eager” to have the inspection to relieve the public concerns about the equipment.

“We would not invade, compromise, or damage the machines,” Kidwell said in the press conference. “The only thing that would happen is the ES&S service technician would open, show us and allow us to see that there are no modems in the machines.”

Smith is also advocating returning to the way votes used to be cast using watermarked paper ballots that are cast on Election Day. She believes that, in spite of population increases in major areas, this is still possible and very attainable. She points out that, under the current system of early voting, polling places do not have a lot of voters show up during the majority of the hours they are open. She emphasized it’s called “Election Day”, not “Election Week”. She says a number of solutions are being floated around and would support making Election Day a federal holiday so that it enables people to go to the polls.

Smith pointed out that there is progress by some state legislators in the calling for a full audit. She notes North Carolina District 84 Republican representative and Secretary of the Caucus Jeff McNeely who stated “We are just trying to see if there are any legs to the rumors we hear about ballots and machines, we want to know if there is anything that could have been changed by the machines, we gave them a deadline to get back to us.”

The outside influence of liberal donors has also come under scrutiny along with its possible effect on the election. McNeely is calling for an accounting of where those monies were distributed. He cites Facebook CEO Mark Zuckerburg who reportedly gave five to six million dollars to counties in North Carolina.

McNeely stated “we don’t have an accounting on that. We are working on a bill that would make it law to evenly distribute that money to our 100 counties. But as it is now, we do not know where that money went or what it went for.”

In 2010, North Carolina flipped from blue to red for the first time in the state House and Senate in almost twodecades. In the 2020 election, former President Donald J. Trump won the state over Joe Biden by a margin of 49.93% to 48.59%. Statewide, the GOP actually gained 4 seats over Democrats in the state House of Representatives and currently hold a margin of 69 – 51.

The state Senate demonstrated a similar scenario as the GOP, in spite of losing one seat in the 2020 election, held on to a 28 – 22 margin. Yet, in the gubernatorial race, incumbent Democrat Governor Roy Cooper outlasted GOP challenger Dan Forest, who served as the 34th lieutenant governor of North Carolina from 2013 to 2021, by a margin of 51.5% – 47.0%.