Arizona AG Complaint
“In the Maricopa County AZ audit, it was just found that 74,243 more ballots were received and counted than were requested.

“AZ’s issues pale in comparison to those of GA, and those of PA are said to be worse still.

In GA the “consent decree” entered into by GA Sec’y of State Brad Raffensperger and Stacey Abrams was totally illegal under GA state law as well as the US and GA Constitutions which requires state legislative approval of any change whatsoever in election law. Raffensperger had no legal authority to enter into any such contract or to issue any such “decree.”

He not only blocked the GA state legislature from its sole authority but also his own Republican Governor’s authority, who was not even consulted.

The GA “consent decree” is thus null and void. Individuals with zero legal authority executed it. That decree totally invented drop boxes, previously not legal in GA at all. These were then emplaced solely in Democratic districts with vote drives offering those voters ice cream and frozen yogurt if passersby would put votes into drop boxes, with no chain of custody, voter pre-registration, or any other means of validating voter eligibility or disqualifying multiple votes.

“This is probably why Merrick Garland is trying, bogusly, to sue to stop all audits. It is a desperate effort to create a whirring cloud of baloney legality so as by brute force propaganda and wealth and abuse of federal power, to cover up the truth about the November 3, 2020 election. This will fail. The level of illegality is so massive, that even the nearly impossible, unseating Biden, might actually be called for, as a purely legal matter, after an actual inspection of the facts. No court has as yet addressed the actual facts.” 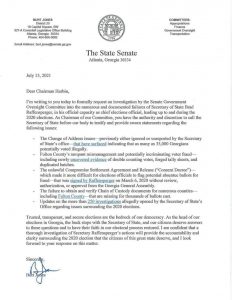