A Sing-A-Long at the US Capitol

I’ve been uncovering voter fraud in Nevada for awhile.

We all knew it was bad, but it’s recently gotten unbelievably worse as Democrats continually pushed for and enacted measures that rendered our election system easily corruptible and open to fraud and manipulation. I have proof, I have witnesses, and I have the support of a concerned community…what I do not have is the support of the local media, my elected representatives, and even my own establishment it seems. Since screaming it from the rooftops on Twitter isn’t working, I’ve created a timeline to help better explain how deep this election fraud actually goes and to spread awareness that the time is running out to fix it.

March 15, 2019: AB345 is introduced that would allow for same-day registration and for individuals including illegals to be automatically signed up to vote at the DMV.

May 30, 2019: Sisolak signs bill that gives felons the right to vote immediately upon their release.

June 1, 2019: Sisolak signs SB450 into law making it extremely difficult to recall government officials in the future, including him.

June 14, 2019: Sisolak signs into law AB345 and officially allows for same-day registration and illegals to be signed up to vote at the DMV unless they remember to opt-out.

February 14, 2020: Fight for Nevada files a petition to recall Governor Sisolak over non-confidence in leadership.

March 24, 2020: Secretary of State Barbara Cegavske announces an unpopular plan for a mail-in only ballot election with only one in-person polling station set up for “same-day registration” voters.

April 16: Nevada lawyers sue the state to allow for criminals to be released for their “own safety” from coronavirus.

April 16, 2020: Democrat lawyers sue Secretary of State Barbara Cegavske demanding both ballot harvesting and inactive voters receiving ballots be added to upcoming the primary election. They also push to allow for signatures that do not match to be thrown out, leaving the validity of ballots in the hands of volunteers.

April 21, 2020: Despite low covid 19 numbers, Sisolak announces there is still no plan or date to re-open Nevada.

April 21, 2020: True the Vote files a federal lawsuit against the secretary of state Barbara Cegavske over the all-mail election, claiming it would “all but ensure an election replete with ballot fraud.”

April 22, 2020: Motion filed by the State Republican Party and the Republican National Committee to intervene as defendants on behalf of Barbara Cegavske to DEFEND the original plan of an all mail-in election that conservatives and Trump himself are against. This puts the Republican Party at odds with Democrats who are suing for more in-person voting locations (among other things) and the right-leaning “True the Vote” who’s trying to stop all mail-in ballots due to fears of election fraud.

April 27, 2020: Four Democratic Party organizations file to intervene and defend the Secretary of State Barbara Cegavske all mail-in primary election against the lawsuit filed by True the Vote.

April 30, 2020: The State Panel including Washoe District Court Judge and commission member Scott Freeman, rejects the idea of releasing inmates due to coronavirus.

May 1, 2020: Nevada lawmakers sign off on $5 million in federal grant dollars to prepare for the all-mail primary, of which the ridiculously exorbitant amount of $750,000 will go toward “marketing” the mail-in campaign alone. To this day I can’t find anyone that’s seen any of this three-quarter of a million-dollar “marketing.”

May 4, 2020: SOS website (which changed the rules for the election constantly throughout the quarantine) begins officially encouraging the already unpopular mail-in voting.

May 5, 2020: I release an article highlighting how the state caved to demands to not only allow ballot harvesting…which is against the state constitution but that it does not allow anyone from my campaign to participate, leaving it open for only my opponents to do so.

Because no one trusted the mail-in ballots, I posted a video encouraging people to mail ballots back as soon as possible to check the state website to make sure they were received. 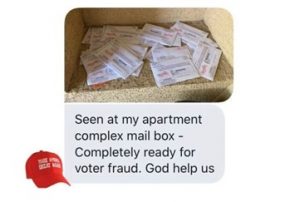 May 15, 2020: True the Vote files another legal challenge against Nevada’s mail-in only primary, asking the SAME federal judge to block the election plan over fears of voter fraud.

May 15, 2020: Judge Richard Boulware (another Obama appointee) suspiciously shoots down the appeal by “Fight for Nevada” to extend the time needed for signatures on the recall petition to recall Governor Sisolak…despite obviously being hampered by Sisolak’s own state-mandated quarantine to gain the much-needed signatures.

May 17, 2020: Voters I had previously encouraged to check their ballots on the SOS election site discover mass discrepancies across the board: Party affiliations had been altered, voting history was wiped clean, and dozens of previous registered Republican voters were now deemed “ineligible to vote.”

May 19, 2020: The SOS election site is now back up, but it’s still showing major discrepancies including my own missing voter history even though I have voted in the last 3 elections here. 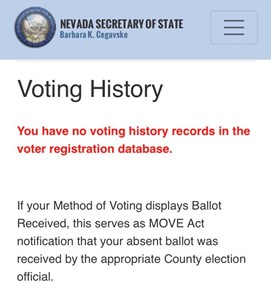 May 20, 2020: President Donald Trump threatened in a tweet Wednesday morning to withhold federal funding from Nevada should it proceed with its mostly mail primary election, alleging that the state’s decision to do so is “illegal.”

The Republican National Committee also issued a statement critical of Clark County’s process, asking for pro-criminal Democrat Attorney General Aaron Ford to investigate whether the Open Meeting Law was violated when commissioners made the agreement “to capitulate to the Democrats’ demands without notifying, broadcasting, or allowing citizens to provide their input.”

The RNC wrote to AG Aaron Ford “Between those two dates, the only advertised County Commission meeting where commissioners could have discussed those decisions occurred on Tuesday, April 21, 2020. And the agenda for that meeting provides no evidence that the commissioners addressed issues of additional in-person voting places or mail-in ballots during it.”

Republican National Committee chairwoman Ronna McDaniel demanded the state investigate what she called a “shady” and potentially illegal “backroom deal” by local politicians that would alter voting procedures ahead of the state’s all mail-in June 9 primary.

May 20, 2022: I republish the article on the current voter fraud going on in Nevada still attempting to highlight the issues on a national level but to no avail.

May 22, 2020: GOP report (that comes directly from the election department) releases its daily received ballot numbers.

May 26, 2022: Press Secretary tweets about ballots piling up in Nevada.

Democrats gained 706 ballots over the weekend, while Republicans unexplainably lost 737 ballots. 5,908 ballots from either non-partisan or other parties also disappear.

May 26, 2020: Sisolak cancels press conference claiming he was exposed to covid.

May 27, 2020: We questioned the GOP point person via email about the discrepancies in numbers and they relayed that it was due to a large amount of “undeliverable” ballots in Washoe and Clark County that had “accidentally” been recorded as returned ballots. No explanation is given as to how that’s even possible or why it would cause a Republican loss and Democrat gain.

May 27 2022 Judge Miranda Du (an Obama nominee) again blocks a lawsuit filed by True the Vote and Nevada voters asking to cancel the state’s unsecured mail-in primary election due to ease of fraud and because of the backdoor agreement between Democratic groups and Clark County election officials to mail ballots to inactive and dead voters.

May 28, 2020: Governor Sisolak is accused of coercing illegal contributions to his campaign through MedMen, a weed company. He cancels the press conference planned that day due to “coronavirus” concerns.

May 29, 2020: The official Nevada Secretary of State account finally responds to my tweet asking why there’s no explanation over their site’s recent hacking and missing votes. They state that the system received a “bad data file” …which ultimately explains nothing about how that could happen. The SOS also claimed that the site is completely up and running and that “ballot harvesting” is illegal in Nevada, which according to statute Elections NRS 293.330 it is. So why are they allowing selected people to collect and hand in Stiger people’s ballots?

May 29, 2020: In a press release Deputy Secretary of State for Elections Wayne Thorley poorly attempts to clarify the legal basis as to why elected officials in Clark County have sent mail ballots to “inactive” voters that cost the state almost $300k

May 30, 2020: I recheck the site to discover again that my personal voting history has been erased and post on Twitter asking others to re-check theirs, revealing continued mass discrepancies of registered voter ballots.

June 3, 2020: District Judge Miranda Du (an Obama nominee) puts off deciding on the legality of the fraudulent Nevada election until AFTER the primary election is already over.

As of today, June 3, 2020: There still has been no explanation from anyone in authority or the Secretary of State as to why their election site keeps getting hacked, where our votes went, why ballots went missing over the holiday weekend, and what was the judge doing this week that was more important than securing the integrity of Nevada’s election.

While the country is being torn apart by media amplified crises, America’s elections are being stolen right from under us…and I don’t understand where the outrage is for it.

Win or lose in this contested primary, I know that I will never stop pushing for Voter ID and securing our elections. We can argue about issues all day…but nothing we do will ever matter or change for the good until we have our election integrity in Nevada back. We secure our elections…and you will see nothing but positive change across this country.