[dis]Closed On Sunday: Kanye For President?

The “Closed On Sunday” singer and popular rap artist Kanye West tweeted on Sunday that he would be running for President.

Kanye is no stranger to the political world. Since President Donald Trump won in 2016, Kanye has often been vocal of his support of President Trump.

This took many by surprise, and even turned some of his fans against him.

His family has often said that although they might not always agree with him on some of the issues, they are glad he is passionate about something.

He did not, however, receive the same response from his Twitter followers, especially with his presidential candidacy announcement. Many of his followers say that he is doing this solely to help President Trump, while others call him mentally unstable.

Could it be a way to help Trump?

Many speculate that he is doing this to split the black vote from the democrats and help Trump win re-election. Due to his late entrance to the race, this would be a completely logical option to assume.

But alas, we haven’t heard anything else from the icon on this topic.

It’s worth noting that not all of the response was bad.

Though it’s uncertain how many voted in spite or with sarcasm, but here is a poll that was conducted in the comments of Kanye’s post. 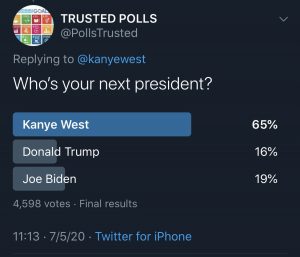