Screening gates shut at Tulsa Trump Rally in hours prior to Trump’s address as Mayor denies gates were closed.

Contrary to mainstream media reports that President Trump’s June 20th rally in Tulsa Oklahoma was not a sellout, eyewitness reports allege that the gates leading to the screening area to enter the rally were shut between 5 p.m. and 6:15 p.m. – a crucial time as crowds were flowing in two hours before the rally.

Clayton Cummings of Channel 9 admits gates were all closed but then states there was a pre-determined closing time.

Eyewitness testimonies, given exclusively to CitizenMediaNews, all told of being denied entry through the barricades in order to proceed to the BOK Arena. Their stories are all similar, but vary, depending on the particular gate/barricade in which they were located.

The most prominent story seems to be that of an eye witness who was volunteering for the event. This witness heard the fire marshal declare to the Secret Service agent that the venue had reached maximum capacity, and to shut it down.

All health screeners and other volunteers at these perimeter checkpoints were immediately pulled from their posts, some of which were escorted out of the arena, and were unable to remain inside to attend the rally. Our witness, however, was allowed to stay for the duration of the rally.

This time frame of the call made by the Fire Marshall is significant and validates the time according to all other witnesses still outside the barricades of the final lockdown of all gates, in which no other person was allowed entry.

When these supporters requested a reason as to why they could not gain entry into the venue, they were told that all screeners had left and that no additional attendees could enter the venue or the surrounding area.

We must clarify that the gates referred to in this statement as being closed are NOT entrance gates into the BOK arena.  We are referring to the 3 initial barricade screening entrances placed several blocks around the perimeter of the venue.  These were the initial entrance checkpoints where supporters wishing to attend the rally had to submit to health screenings, metal detectors and other security screening measures prior to being allowed to begin the 2-3 city block walk from the gates/barricades to finally arrive at the BOK Center.

Subsequently, the media narrative began to develop quite rapidly, that the Trump rally was a complete bust, and that he could not even fill the arena, much less the overflow area where the jumbotron live feed was to occur for the outdoor portion of the rally.

The so-called “low turnout” was their reason for dismantling the overflow area altogether, claiming no one else was there wanting to get in. All the while, thousands of supporters were stranded outside of the barricades, several blocks away from the BOK, unable to enter the overflow area to participate in the rally.

Not only is this a violation of the first amendment right of the citizens who wished to attend a political rally, but it is also a form of election fraud/tampering by purposely sabotaging the attendance of the president elect’s campaign for re-election rally.

We can only surmise from the various statements and the firsthand accounts that the City of Tulsa in coordination with the BOK administration, orchestrated the infringement of citizens rights to attend a political rally in an attempt to sabotage the rally of President Trump

Tulsa Mayor, GT Bynum, stated in his Facebook post on Wed. 6/24/20 “Everyone who wanted to be in the building as the event began was in the building.” Then referred to those who were denied entry as part of “some grand conspiracy.”

On Mon, 6/22, Tulsa Police Dept posted a statement asserting that the brief period of approximately 30 minutes where an entry was closed down due to protesters was “the only time ‘local law enforcement in Tulsa’ closed a gate, thereby restricting anyone from entering the event.” 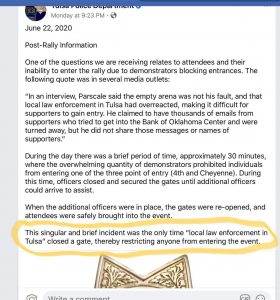 Despite multiple attempts by numerous witnesses to present their firsthand experiences of being locked out of the venue prior to Trump’s address, most media continue to not be interested in their stories and even deny that they have been contacted by these witnesses.

Lori Fullbright on Channel 6 denies corresponding with those with first-hand accounts. 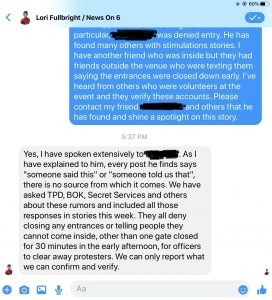 Erin Conrad of Channel 2 refuses to answer messages though she was reporting on the ground during the rally.  We have contacted her repeatedly to follow up on possible reporting of gate closures.

We have gathered the testimony of many people who were denied entry to the Trump rally during the hours between 5 pm and 7 pm.  Below are their stories: 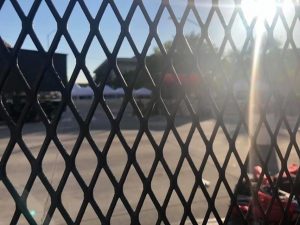 From a volunteer health screener:

The evidence is overwhelming: this was an outright attempt to blunt the momentum that President Trump has going into the November election.

Not only does our president have to deal with adversaries such as China, Iran, and North Korea, but also the democrats here at home, and even “Republican in Name Only” (RINOs) who all have their foot out trying to hamper the work the President is trying to accomplish on behalf of all Americans: safer streets, a respect for our historical monuments, and greater opportunities for all Americans.

Stopping the people who hold America, and Americans, down is the reason President Trump was elected in the first place. It’s no wonder career politicians of all stripes are desperate to stop a president who has only been in office for three years!

The “organized desperation” of the opposition- whether it’s riots in the streets or preventing good citizens from hearing the presidents message about his accomplishments and plans for his 2nd term, must be scaring a lot of career politicians.

———-
If you have read this far we would like you to click on this story’s link to our Facebook page. Facebook has shadowbanned and restricted our posting capabilities. This direct link will help prove them wrong. Thank you.