“Leftists and online trolls doing a victory lap, thinking they somehow impacted rally attendance, don’t know what they’re talking about or how our rallies work.

Reporters who wrote gleefully about TikTok and K-Pop fans – without contacting the campaign for comment – behaved unprofessionally and were willing dupes to the charade. Registering for a rally means you’ve RSVPed with a cell phone number and we constantly weed out bogus numbers, as we did with tens of thousands at the Tulsa rally, in calculating our possible attendee pool. 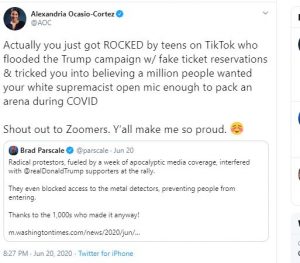 These phony ticket requests never factor into our thinking. What makes this lame attempt at hacking our events even more foolish is the fact that every rally is general admission – entry is on a first-come-first-served basis and prior registration is not required.

The fact is that a week’s worth of the fake news media warning people away from the rally because of COVID and protestors, coupled with recent images of American cities on fire, had a real impact on people bringing their families and children to the rally.

MSNBC was among outlets reporting that protesters even blocked entrances to the rally at times.

For the media to now celebrate the fear that they helped create is disgusting, but typical. And it makes us wonder why we bother credentialing media for events when they don’t do their full jobs as professionals.”

This response rebuts AOC’s claim that she had anything to do with an apparent low turn out during the Trump Campaign Rally in Tulsa.

Citizen Media has attended no less than thirty of these rallies over the past two election cycles. We can confirm first hand that Trump’s Campaign Manager is correct as to how access is gained at these rallies.

However, if AOC is taking responsibility for having anything to do with the organization of these activities using the social media, Tik Tok, which is owned by China, this is a blatant and clear case of campaign interference using a foreign government which the left-leaning members of congress have vilified President Trump since prior to his inauguration.

Shout out to Zoomers. Y’all make me so proud. ☺️ https://t.co/jGrp5bSZ9T

At this time, Citizen Media is calling for AOC to immediately terminate her campaign and remover her name from the ballot prior to the New York Primary on June 23, 2020.

Anything less is hypocritical but normal procedure for a staunch liberal Democrat.

Guest Columnists – On the Ground at Tulsa Rally