Have you heard of Jeremiah James?

He was murdered in Chicago over the weekend. Another teenage boy was injured in the incident.

Where is the outcry? Well, after all, it is just one 15-year old boy.

Well, no, how about seventeen.

Seventeen black males under the age of 30 killed since June 2nd.

Take a look at the spreadsheet below.

When you filter this to under 30-years old, the total drops to 95 deaths. 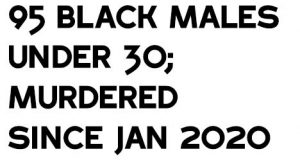 Take another step further; you will find a total of 11 homicides of black males and females under the age of 17.

Have you heard their names?

A total of 19 teenagers were killed since the beginning of the year.

The bigger, unanswered question is who made the killings? In many of these cases, as the Chicago Sun-Times puts it, “No one in custody” is still the classification.

As we watch the country deteriorate, the likes of Candace Owens and Virginia Candidate for Congress, Jarome Bell speak out, only to be besmirched and belittled when their statements are based definitively on truth.

Look at the spreadsheet below and make your own judgment.

Confession: #GeorgeFloyd is neither a martyr or a hero. But I hope his family gets justice. https://t.co/Lnxz0usrp5

Take a look at this screenshot from a popular memorial site.

Have you cried or protested for them?

Why not? Because their deaths do not fit a preplanned narrative? These are just images from the last week in May barely 19 days ago.

Look at all these faces killed in Illinois.

Look at these 45 black male faces.

I set out to make a statement with this post, but I believe I have made a more significant impact on myself by actually seeing the real disparity in what happens.

“Gone with the Wind” Burns Again