When news broke today that the president was taking Hydroxychloroquine to prevent Covid-19, the media went absolutely crazy (again.) These, by the way, are the only two gears the media seems to have: when they’re not bashing him, they’re going crazy at every single thing he does.

Leave it to the media to always find outrage in what he does, even if they’re not sure why they’re outraged.

The media should give our president some credit, however: he suggested Hydroxychloroquine and he’s actually taking the stuff himself. Imagine that.

It’s almost like as if he were a politician living up to his campaign promises….hey wait a minute…yeah, he did that. Who knew that would happen?

Not to hear the press tell the story of this presidency. They don’t like the guy.

And that brings up that other disease that is seriously and negatively affecting the psyche of the country: Trump Derangement Syndrome, also known as TDS-16.

It’s a frightening disease, and I’ll bet you know some people who have it. Just like COVID, it hit the country hard and fast.

CAVUTO IS AN IDIOT. THIS DRUG DOES NOT KILL PEOPLE – Neil Cavuto Stunned by Trump Taking Hydroxychloroquine: ‘It Will Kill You’ https://t.co/S71EAsZscn via @BreitbartNews

On election night 2016 I went to bed with Nate Silver’s “Hillary has a 93% chance of winning” on the news. I woke up to the same people on T.V. foaming at the mouth. Literally. 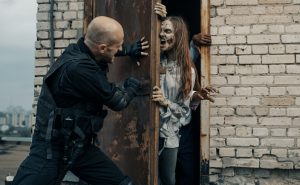 “We are not Racists!”

It was as if the Dawn of the Dead, or any other zombie movie you can think of, had come true. And the day after the election was only the beginning.

Rather than the TDS-16 virus dying out quickly, it spread. Fast. Soon it infected large swathes of America.

It got so you couldn’t be in the same room with some of these infected zombies. They lost all hearing and rational thought.

They began ranting and raving uncontrollably. Some of them would even start screaming “racist!” for no reason. In public.

Yes, it’s an awful time we’re living through with both TDS-16 AND COVID 19 going on, but we’re Americans, and I know we’ll get through this. We’ve been through tougher days before.

VIDEO: Barr Reveals More by What He Doesn’t Say