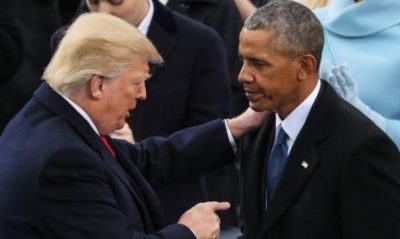 WSJ: Obama Admin Must Account for ‘Abuse of Surveillance Powers’ https://t.co/mIE0vOFZae via @BreitbartNews

Quoted in the article is Senator Rand Paul, (R-KY)

Time to investigate the Obama officials who concocted and spread the Russian conspiracy hoax!

In the original WSJ article by James Freeman, he said, “The Mueller report confirms that the Obama administration, without evidence, turned the surveillance powers of the federal government against the presidential campaign of the party out of power.”

In the Breitbart article by Dr. Susan Berry, she said, “While Democrats and other members of the “Resistance” flail about in the wake of news the Robert Mueller investigation did not find evidence that President Donald Trump’s campaign “conspired or coordinated” with the Russian government during the 2016 presidential election, Freeman observed Monday the report confirms it is former President Barack Obama who “owes the country an explanation” for his administration’s “historic abuse of government surveillance powers.”

Signaling that accountability is on his mind, Trump retweeted the  Breitbart article Monday night, followed up by  three tweets about the Stanley Cup and upcoming events at the White House.