CMN has been reporting on the Hollywood college admissions scandal. Some of the applicants needed an athletic background. In this “pay-to-attend” scheme, some of these applicants were made out to be on the crew team. Just saying.

He graduated in 1995 with a Bachelor of Arts degree in English literature.

Beto! Dude! English Lit? Just turn in your man card at the door. 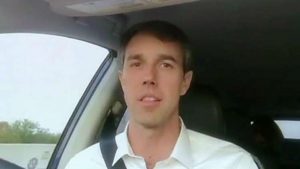 Colorado Goes Against the Constitution

All About Door Knocking