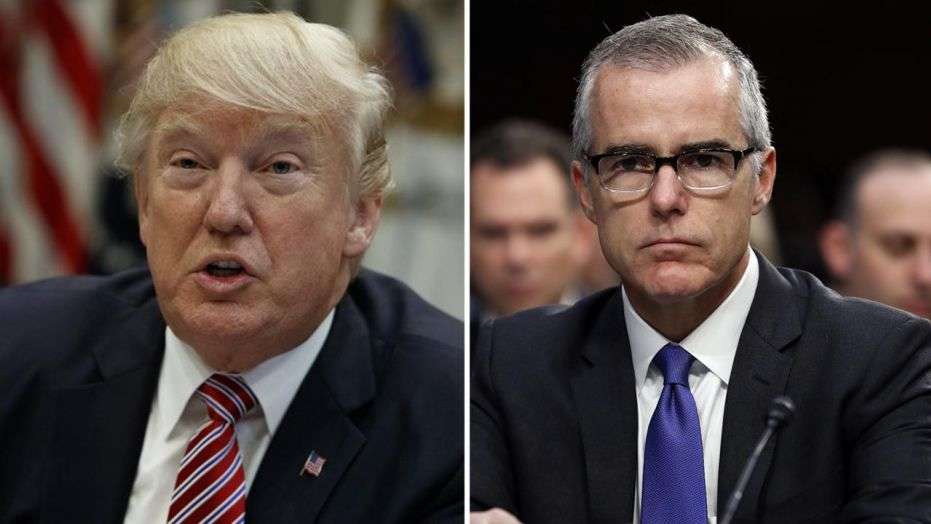 Thursday, former Deputy Director of the Federal Bureau of Investigation admitted, in a 60 Mins interview with Scott Pelley that be planned to overthrow the US Federal Government based upon unfounded gossip, which he may have, himself started.

“There were meetings at the DOJ at which it was discussed whether the vice president and a majority of the cabinet could be brought together to remove the president of the United States under the 25th Amendment.” Scott Pelley on what McCabe said to 60 Mins.

"There were meetings at the DoJ at which it was discussed whether the vice president and a majority of the cabinet could be brought together to remove the president of the United States under the 25th Amendment." Scott Pelley on what McCabe said to 60 Mins pic.twitter.com/QbgefzaPA8

McCabe described his plan to remove President Donald J. Trump, from office, based on his personal hatred for Trump under the false accusation of “Obstruction of  justice” or the “25th amendment”.

Read More about the interview From CNN:

This morning new revelations about the crucial first days of the Russia investigation, the former acting FBI director breaking his silence about why he launched the FBI’s probe into the Trump campaign’s ties with Russia.

Andrew McCabe says that he feared the investigation might be blocked before it started and that he could be fired next. Speaking to CBS, McCabe also reveals new details about the meeting with President Trump just hours after he fired FBI director James Comey.

ANDREW MCCABE, FORMER FBI DEPUTY DIRECTOR: I was speaking to the man who had just run for the presidency and won the election for the presidency, and who might have done so with the aid of the government of Russia, our most formidable adversary on the world stage. And that was something that troubled me greatly.

SCOTT PELLEY, HOST, CBS “60 MINUTES”: How long was it after that that you decided to start the obstruction of justice and counterintelligence investigations involving the president?

MCCABE: I think the next day I met with the team investigating the Russia cases. And I asked the team to go back and conduct an assessment to determine where are we with these efforts and what steps do we need to take going forward?

HARLOW: All right. So a lot of jaw-dropping headlines there. And they don’t stop there. McCabe also claimed there were meetings within the Justice Department about removing the president by invoking the 25th Amendment.

There is clearly a lot to get to this morning. So let’s go to Laura Jarrett who joins us from the Justice Department. Wow, Laura Jarrett. Where do we begin?

LAURA JARRETT, CNN JUSTICE REPORTER: Wow, indeed. Well, a remarkably candid interview, Jim and Poppy, from the former acting director of the FBI, the man who opened the investigations, the early investigations into Russia back in 2016 or as of 2017. And he describes not only the turmoil within the FBI and the Justice Department at the time, the chaotic time after former FBI director James Comey was fired, but he also goes on to explain how he sought to preserve the record on Russia. Take a listen.

MCCABE: I was very concerned that I was able to put the Russia case on absolutely solid ground in an indelible fashion that were I removed quickly or reassigned or fired that the case could not be closed or vanish in the night without a trace. I wanted to make sure that our case was on solid ground and if somebody came in behind me and closed it, and tried to walk away from it, they would not be able to do that without creating a record of why they’ve made that decision.

PELLEY: You wanted a documentary record.

PELLEY: That those investigations had begun because you feared that they would be made to go away.

JARRETT: Earlier this morning “60 Minutes” anchor Scott Pelley also went on to describe that McCabe will confirm for the first time on the record that there were, in fact, discussions about invoking the 25th Amendment to recruit cabinet members to try to oust President Trump from office. Those discussions, as we reported back in December with the deputy attorney general Rod Rosenstein. And at the time, Rod Rosenstein fiercely pushed back on it.

I want to read to you what he said at the time about those reports including that he sought to wear a wire to record the president. At the time he said, Poppy and Jim, “I never pursued or authorized recording the president. And any suggestion that I have ever advocated for the removal of the president is absolutely false.”

So obviously more to come on this. The book isn’t even out yet.

SCIUTTO: On the other issue here because the man who may soon oversee the Mueller probe is, of course, William Barr, Trump’s pick for attorney general, you have new reporting that he’s already consulting with top DOJ officials as to how to handle the Mueller report. What have you learned?

JARRETT: That’s right. I think the challenge here for William Barr is how to balance the fact that the Justice Department does not typically reveal what we can call derogatory information. So problematic information about uncharged individuals. They do not typically do that. But at the same time he has to balance the public’s right to know what happened to the Russia investigation, what Mueller found. And so those are the things that he’s balancing here, and obviously the biggest issue is how much does Congress find out about the Mueller report.

Under the regulations they have to say very little other than the investigation is closed. That’s really it. And so Barr is in consultation with top Justice officials about what exactly he will say to Congress.

Listen, a lot to break down here as Poppy was saying. One that’s absolutely catching our attention is that this idea about the 25th Amendment, the idea of using this provision to remove the president from office.

[09:05:04] Andrew McCabe, well, according to Scott Pelley’s account of what Andrew McCabe told him, he says that this was not a theoretical discussion, but they were, quote, “counting noses,” already kind of canvassing how many cabinet members might support such a removal.

Without any proof that the DNC was hacked by Russians, McCabe created a way to overthrow the duly elected President who McCabe did not support.

“Republicans have been asking about McCabe, Strzok, and Page—the triumvirate of corruption—for nearly two years. Now, it’s time to get those answers by bringing McCabe and DAG Rosenstein in front of the Judiciary Committee,” said Rep. Doug Collins (R-Georgia)

Disgraced FBI Acting Director Andrew McCabe pretends to be a “poor little Angel” when in fact he was a big part of the Crooked Hillary Scandal & the Russia Hoax – a puppet for Leakin’ James Comey. I.G. report on McCabe was devastating. Part of “insurance policy” in case I won….

WHERE IS THE JUSTICE?

McCabe’s interview proves to me that he,

In light of McCabe's new claims, I urge the Chairman to schedule a hearing immediately and demand the testimony of McCabe and DAG Rosenstein. If they refuse, the Judiciary Committee should compel their testimony. pic.twitter.com/hO5vd7p1bP